Next Generation of 3PAR

If you were at HPE Discover in June (2019) or if you follow HPE technology development, then I know you’ve heard about HPE Primera, HPE’s newest Tier-0 storage array and an evolution of the HPE 3PAR StoreServ Family. Since the announcement, I’ve been getting a few questions about Primera from our clients. It seemed appropriate to answer some of those questions in this month’s post.

What is HPE Primera?

HPE Primera is a Tier-0 enterprise storage solution designed with extreme resiliency (100% uptime guarantee) and performance targeted at the most critical workloads that simply cannot fail. The key word here is “critical”. HPE Primera is not intended to be a default replacement for the HPE 3PAR StoreServ 8000 and 9000 arrays. Your requirements could certainly dictate an HPE Primera solution, but, Nimble (HPE Tier-1 solution) may be a better fit.

At launch, HPE Primera includes three models: HPE Primera 630, HPE Primera 650, and HPE Primera 670. Each model is available as an all-flash version (A630, A650 and A670). These models come in 2 and 4-Node versions. In the graphic below, you can see how the current HPE Primera models might line up with the HPE 3PAR StoreServ and Nimble Models: 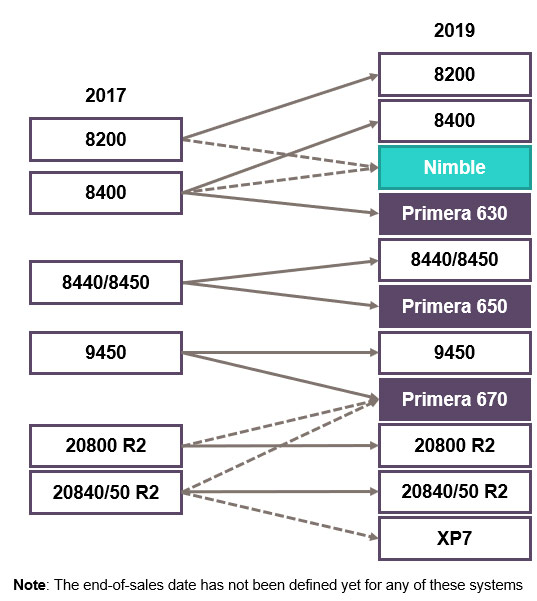 Well, in many ways, the answer is yes. But, more precisely it is an Evolution of the HPE 3PAR StoreServ Family. It is the same in that:

HPE Primera is different from the 3PAR StoreServ arrays in these ways:

The short answer is No. HPE has not announced the End of Life (EOL) for the HPE 3PAR StoreServ. When an EOL announcement is made, customers will still be able to purchase them up to 6 months afterward. Hardware upgrades will continue to be made available up to 3 years after the announcement and support will be provided for 5 years after the EOL announcement. This is HPE’s normal cycle when an EOL is announced for an enterprise solution and it will hold true for the HPE 3PAR StoreServ family.

If I’m looking at a 3PAR now, shouldn’t I just go with the Primera instead?

Not necessarily. Remember, there has been no EOL announcement made for the HPE 3PAR StoreServ. And you’ll have 5 years of support once the announcement is made. Also, the Primera is designed for the most Critical workloads in terms of availability and performance requirements. The HPE 3PAR StoreServ or a Nimble Array may line up more appropriately with your unique requirements.

HPE Primera is an evolution of the HPE 3PAR StoreServ family and it will fill the needs of Tier-0 workloads. While many of the features and functionality are the same between Primera and StoreServ families, there are also significant differences in architecture. For many, the current HPE 3PAR StoreServ Family (8000/9000) may still be the right fit. For others, a Nimble solution may be the best solution. Contact Zunesis to find the right storage solution for your organization.

Hello, I’m James Hughes, VP Engineering and Services for Zunesis, Inc. I’ve been implementing and managing Information Technologies for over 30 years. My experience includes software development, management of IT Operations, building a technical services practice, and consulting on IT projects throughout the United States and Canada. Prior to taking on the role of VP here at Zunesis, I spent nearly twelve years as Practice Lead for our Storage business. The goal for everything I’ve done throughout my professional career is to help make the lives of my end-users and clients better by leveraging technology to solve their business problems.