As 2016 begins there are two very large IT contributors going in opposite directions. On one side of the coin, we have Dell looking to acquire EMC for $67B, which is beyond comprehension. On the other side we have HP splitting itself in 2 and trimming itself down to better address the changing Enterprise market challenges. Which will rise to the surface may take a few years to know for sure (assuming we ever find out).

Looking at – not sure what they will call themselves – DELLware (my choice) we see two giants trying to fill the whitespace neither has covered. Adding in the VMware factor on the EMC side and the majority Nutanix ownership with DELL gives rise to potential interesting future offering. That is if NSX has the legs necessary to carry the somewhat marginal offering in the Network space today. The acquisition price will surely require a large selloff of valued assets; and with all this, will there be any $’s left in R&D to make this new offering viable? Time will tell as it tells all. 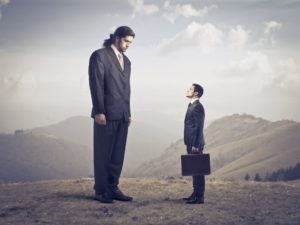 While DELL/EMC are beginning their journey, HP has completed theirs and will be looking to hone its Enterprise offering in a more targeted way. HP has lost its voice over the past few years, and many of its longtime customers have “broken up” with HP technology. Cisco has made a huge dent into the Blade market, hurting what once was the cornerstone or HP’s future. Improvements in server density offerings like Moonshot should be well positioned for future high performance application scaling. HPE’s acquisition of Aruba has certainly improved HPE’s Network offering. With Openflow already being available on certain HPE switches, they are positioned nicely to chip away at Cisco in the Virtual Switch space.

HPE – being smaller and having taken the Capital hit needed to split off – sits in a very strong position for acquisitions to grow their portfolio…DELLware not so much. Stay tuned, this is going to be an interesting next few quarters as all of this comes into focus.