I grew up as the kid who watched Star Trek: The Next Generation and Saturday morning Avengers cartoons.  It’s no surprise that I have always been fascinated by technology and what the future holds.  I can’t even imagine telling my 6-year-old self that one day we will have a full-sized version of that radio-controlled car he got for his birthday last year.  It’s crazy when you think back on the stuff you grew up with and compare them with today’s technology.

I thought I’d take the opposite approach in this blog.  Instead of looking to the past, I thought I’d compare the future to what we have today.  I took a few future ideas/concepts that I’ve come across in the IT industry as buzzwords and tried to find something like that in today’s technology.

With self-driving cars being the inevitable conclusion, cars will be soon be able to detect when something is wrong and drive itself to the shop to fix itself.  You can extrapolate this to anything.  Maybe your car needs new windshield wipers.  Well, instead of going to your auto parts store yourself, your car will recognize when they are failing and take care of the problem by itself.

As someone who just had to spend $700 at a dealership because a rabbit decided my car’s wires looked tasty, I can’t wait for this to happen!  However, if we look beyond just cars, this technology is available today.  HPE recently acquired a storage company called Nimble.  If you’re not familiar with Nimble, they’re the only storage company that I know of that claims to be a software company.

If you take a peak under the hood (car pun intended), Nimble’s secret sauce, and the reason HPE purchased them, is a software call InfoSight.  It eliminates the need for Nimble, and soon to be HPE, to have tier 1 and 2 support calls.  Let’s say there was an issue.  Nimble would explore the issue, fix that one instance, and then mass update all other instances of that same scenario across their whole customer base.  Much like my car driving to the shop overnight to fix a problem, without even knowing, Nimble customers are getting fixes.  We’re not quite to self-repairing cars, but this technology could be a foundation for that in the future.

Of all the “Future Ideas” I came across, I think this one is closer to becoming a reality than most.  What I mean by the future idea of AI based security is truly removing the human element from security altogether.  The technology isn’t far off, if not already here today.

Aruba’s UEBA (User and Entity Behavior Analytic) product called Introspect constantly monitors and reacts to any issues within a network.  It 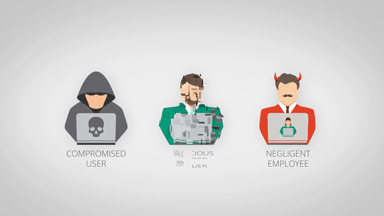 looks for anomalies from “normal” use and can send out an alert and even act on its own.  A great example for Introspect is if it detects malicious activity from an employee device, it can automatically quarantine it in real time to protect the rest of the organization.  This may not seem too new, but this applies for all entities within an organization.  A few of the well-known cyber security breaches over the past decade have come from devices already inside of the company firewall, like a thermostat or printer.  If a thermostat starts looking at financial documents, Introspect would flag that as an anomaly and shut it down.  A regular firewall or end point security tool would miss that.

I think we’re still a few years out from Skynet (or Ultron for the comic book nerds) being brought online, but the Missile Defense Agency is already working with/testing AI based systems for training.  Tools like Introspect are a great way for people to build trust in AI.  Gradually, it will be responsible for more and more of the everyday things we take for granted.

Imagine a world where you don’t need to carry a wallet or keys.  With more and more of the things we interact with everyday becoming connected to the internet, it’s not a far leap to say that one day we won’t need to carry things like ID’s or even cash.

In the world we live in today, how annoying is it that I still have to take out and show my Costco card every time I walk in?  Imagine just walking in without having to do that. The store already knows who I am and how I intend to pay.  I just shop like normal and walk out.

There’s a big creepy factor with this.  With any new technology, society has to acclimate to the change.  Imagine if I told my 6-year-old self that we would all be walking around with devices that know our locations at all time.  Super weird, right?  Today, we don’t even think about that.

If you’ve read this far, you can probably tell that I love talking about this stuff.  If you’d like to learn more about any of the vendors or products I mentioned (Nimble, Infosight, Aruba, Introspect), please reach out to me.  If you think I’m way off on this and completely wrong, please reach out to me as well. I’d be happy to debate you!  Thanks for your time.