The other day I was in bed scrolling through my Facebook, bothered by the lagging of the page, when I saw a post that was far too relatable. It read “crazy how we can transmit data from Mars but Wi-Fi still can’t reach people’s bedrooms”. Upon reading this, I began to explore new technological developments relating to Wi-Fi. I stumbled upon the development of a new type of Wi-Fi that could virtually solve that problem of unreliable internet access. This new Wi-Fi development is called Wi-Fi 6. 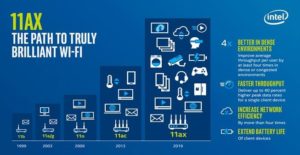 Wi-Fi 6 is the newest generation in standard Wi-Fi technology. It is also known as “AX WiFi” or “802. 11ax WiFi.” It still fulfills the original function of Wi-Fi as it connects devices to the internet, however, it does so in a way that is faster, more efficient, and overall better for our growing society than the current 802. 11ac WiFi.

What is the goal?

While Wi-Fi 6 may come with greater speeds, that is not its overall goal. Rather, its purpose is to allow a larger number of devices to have improved network access. This would be especially beneficial in settings where there are mass amounts of devices connected to Wi-Fi at one time. These places including offices, universities, schools, companies, along with many more highly connected areas. Wi-Fi can only connect with a specific number of devices at once. When there are more devices than the network is capable of handling, there are issues with overall speed and connectivity. The new technologies of Wi-Fi 6 would help mitigate the problems associated with placing large amounts of Wi-Fi connected devices on a single network.

This new Wi-Fi allows for the connection of more devices, as well as improving the battery life of devices. It does this through a new “target wake time” (TWT) feature that allows the router to detect when devices are not being used. By doing this, it can halt the transmission of Wi-Fi, conserving power in devices, therefore improving overall battery life.

What technology will allow this to happen?

Two key technologies are responsible for accomplishing the goals of WiFi 6. These are MU-MIMO and OFDMA.

OFDMA stands for “orthogonal frequency division multiple access”. This technology allows one transmission to deliver data to multiple devices at once. Improving each transmission from the router to the device.

Although this new technology is exciting, it is not plausible for members of the general public to rush out and get these new routers. This is because your devices need to be compatible with WiFi 6 technology.  The new routers are a bit costly. The implementation of Wi-Fi 6 in our society will be gradual. It will prove to be invaluable with the growing amount of devices in our society. As new phones, laptops, and other devices are released, most of them will likely be equipped with Wi-Fi 6 compatibility. As these new devices emerge, so will the presence of Wi-Fi 6 routers.

Want to know more about Wi-Fi 6 or wireless networking? Our network engineers can assist you with any questions you may have. Contact us today.

I have been working with Zunesis since 2011 as the Manager of Customer First. My tech industry experience spans over 25 years. I enjoy hiking and exploring Colorado, gardening and spending time with my family and my dog, Molly.